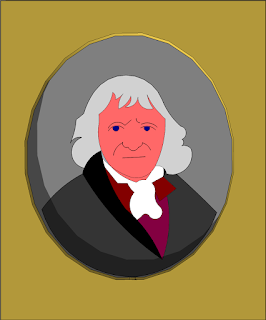 I've been interested in 19th century Nova Scotia naturalist Titus Smith for a while.  I went to the provincial archives a few weeks ago and looked at the microfilmed journals from 1801-2.  The archivist was sure they had been transcribed, but couldn't find a reference.  The handwriting is lovely, but daunting.

Persistent searching led me to four copies of a typewritten document at the library of Natural Resources.  It was made in 1955 by a forester named Lloyd Hawboldt, who was surely an unusual thinker.  His transcript focuses on geography and forestry, evidently leaving out a lot of detail about plants and ecology.

DNR kindly sent me a scan, and Adobe did a plausible job of OCR.

For sheer historical interest, you ought to take a look.  It's about 40 pages, and begins with a letter from Lieutenant Governor Wentworth:

"Your principal object in this survey will be to visit the most unfrequented parts, particularly the banks and the borders of the different rivers, lakes and swamps, and the richest uplands, for the purpose of discovering such spots as are best calculated for producing hemp, and furnishing other Naval Stores. You will make your remarks on the soil, the situation of the-lands, and the species, quality and size of the timber, the quantity of each sort also, and the facility with which it can be removed to market. The thickness and length of mast timber, you will attend to in an especial manner, and in every place which you shall deem calculated for these purposes, you will as near as possible estimate the quantity of acres, the possibility and means of rendering them fit for cultivation either by banks, drains or otherwise." 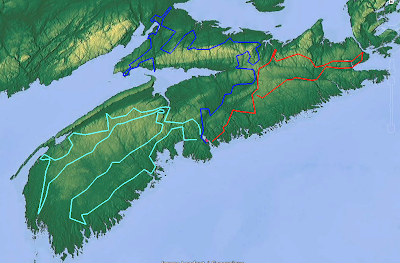 This was before Lewis and Clark. Here are the basics:


Smith mentions moose, caribou, beaver, old-growth, fire, flood, barrens.  He was truly a born ecologist.  The KML files of tracks and journal entries, which you can view in Google Earth and which I'm still working on, are available for download.  If you are familiar with Google Earth, you can fly the tracks or play the journal entries in sequence.  If you do anything interesting, please let me know.

Smith's original map has been scanned by the archives:

The journals are a trove, and some enterprising PhD candidate could use modern text analysis tools to create a picture of 19th century Nova Scotia.  Here are word clouds from the three tours:

There are a lot of flattering references to Smith as a very early ecologist, including a JSTOR reference. I've transcribed Titus Smith : "the Dutch village philosopher", pioneer naturalist of Nova Scotia, 1768-1850." an address by Harry Piers, of the Nova Scotia Institute of Science in 1936

Smith, of course, was the mentor of artist Maria Morris Miller, whose lovely wildflower portraits grace the Art Gallery of Nova Scotia: 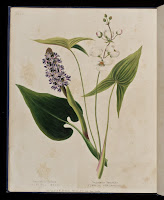 By all accounts, Smith is the Thoreau of Nova Scotia.  Can anyone point me to more sources?