This 400 acre provincial park was built and is maintained by the Cole Harbour Parks and Trails Association. A hike at the Heritage Park will have you meandering through the fields of two old farms, following a babbling brook, and sweeping past the shoreline of Cole Harbour. 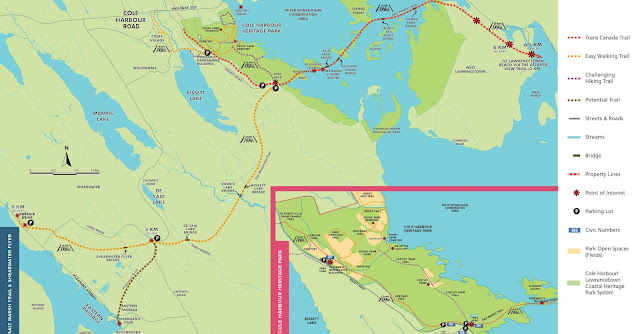 Running the length of the park, this trail is accessible from many points. It is the only trail within the park where bikes are permitted. Because it is relatively flat, it is a good choice for wheelchairs or strollers.

The gentle hills in the park are typical of numerous drumlins that dot the coast, providing magnificent views. Drumlins are whale-shaped hills of clay and stones formed by retreating glaciers 15,000 years ago. (In Gaelic druim means the crest of a hill.). These natural barriers protect large shallow estuaries, allowing salt marshes to develop.
Poor’s Farm Road - 0.9 km - difficulty 1
This follows the abandoned access road to the Poor’s Farm, crossing brooks and skirting fields.
Brook Trail 0.3 km - difficulty 2
A short loop off the Panorama Trail along a rushing stream.
Jerry Lonecloud Trail - 1.0 km - difficulty 2
Jerry Lonecloud (1854-1930) was a familiar sight to Cole Harbour residents in the early part of the last century. He was a member of the Millbrook Mi’kmaq band, which summered in the Cole Harbour area, traveling along the Shubenacadaie River and through the present-day Dartmouth. lakes. He gathered sweet grass in the area which he used to make coiled baskets for sale in the Halifax market.
Jersey Jack Trail - 1.0 km - difficulty 3

Jaques Levesconte from the Isle of Jersey jumped ship from a grounded vessel in the 1870s , married a Cole Harbour girl, and was a notable and colourful character in the area for 75 years.

In 1865, John Costley was the fisheries inspector in Cole Harbour. The open fields are the only remaining evidence of his farm. This trail transects a large block of more or less undisturbed terrain.

Beginning in 1887, this was the site for Halifax County’s residence for the aged and homeless poor and the mentally challenged (or “harmless insane” as they were referred to at the time). This site saw a complex of several buildings being constructed forming an active and self-contained farm that supported up to 90 residents. The farm, later known as the County Home, was used until a fire forced closing in 1929. Dependant on funding, archaeological field work with public participation continues each year at the site to determine building locations and to recover artefacts for later site interpretation.

Nearly 300 residents died over the 42 years of the Poor’s Farm existence. Most were returned to relatives in home communities, but it is thought perhaps 16 are buried here. This cemetery is being inventoried, cataloged and restored by a field archaeology program at Saint Mary’s University.

The remains of a rock-lined reservoir which formed part of the water supply system for the farm. The reservoir was covered at one time and was close to 60 metres (200 feet) in diameter.
George Bissett House
George Bissett held several prominent positions in Cole Harbour. For some time he was a Justice of the Peace. In 1890 he became the first county Councillor in Cole Harbour. He was also referred to as Squire. George Bissett died in 1916.
Costley Farm
One finds the remains of the farm at the midpoint of this front country trail. The clearing, faint foundation marks and a hint of flower garden and fruit trees are all that is left on the site.
Ware (Weir) Inn
A roadhouse that catered to visitors, travellers and affluent sportsmen. King George V may have stayed here on a hunting trip to Cole Harbour marsh.