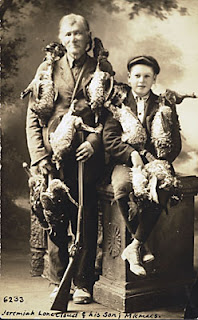 Jeremiah Bartlett Alexis (Jerry Lonecloud) Halifax
Photograph: Clara DennisNova Scotia Museum, Halifax
This is the first in a series to bring you details of persons, places, and things whose names grace our park trails. – Ed.

Jerry Lonecloud (1854-1930) was a familiar sight to Cole Harbour residents in the early part of the last century. He gathered sweet grass in the area which he used to make coiled baskets for sale in the Halifax market.

There is some uncertainty about the details of his full and fabulous life. He was born in Belfast, Maine, the son of Abram and Mary Anne, reported to be Mi’kmaq from Nova Scotia. Mi’kmaq are part of a larger Algonquian/Wabanaki culture which traveled freely in parts of present day New England and Eastern Canada.

Lonecloud’s father, Abram, had something of an exciting life himself, having participated in the capture of John Wilkes Booth, the assassin of Abraham Lincoln. On April 26, 1865, Company H of the 16th New York Cavalry shot and killed Booth, who was hiding in a barn in Virginia.

After the capture of Booth, the story goes, Abram went to claim his share of the $100,000 reward and was never heard from again. He is presumed to have been murdered.

Prior to his military service, Abram was connected with Morse’s Indian Root Pills Co., of Morristown in upstate New York.

Shortly after his father’s disappearance, Lonecloud’s mother died and the orphaned 11 year old made his way to Nova Scotia, probably crossing the Bay of Fundy by canoe – once a frequent route - with three younger siblings on an epic two-year journey. Until the 1880s, Lonecloud made his living by hunting, trapping and guiding. He was a member of the Millbrook Mi’kmaq band, which summered in the Cole Harbour area, traveling along the Shubenacadaie River and through the present-day Dartmouth. lakes.

In the 1880s, at the height of a patent medicine craze, there was a famous and outlandish traveling extravaganza called Healy & Bigelow’s Kickapoo Indian Medicine Show. At any one time there were up to seventy-five H&B shows touring the east, and in their winter quarters in Connecticut lived several hundred Indians. Lonecloud joined one of the shows and traveled extensively, perhaps to New Brunswick, where he married Elizabeth Paul.

Although patent medicines are sometimes dismissed as quackery, they are often based on careful formulations of herbal remedies. Perhaps Dr. Lonecloud, with his wide knowledge of traditional Indian remedies, made a contribution to the recipes used by Healy & Bigelow.
It is thought that Lonecloud also traveled with Buffalo Bill Cody’s Wild West show and had an interest in The Kiowa Medicine Show, along with Louis Newell – “Chief Rolling Thunder”, from Old Town, Maine, center of the Penobscot culture.

Returning to Nova Scotia, Lonecloud, Elizabeth and their family of seven children made a living selling handicrafts. Lonecloud became chief medicine man of the Mi’kmaq.

For more on Jerry Lonecloud, read the 2002 biography and memoir - Tracking Doctor Lonecloud: Showman to Legend Keeper by Ruth Holmes Whitehead. It is taken from notes and interviews done in the 1920s by Halifax journalist Clare Dennis.

The book covers the details of Lonecloud’s history, as well as his reminiscences, observations and contemplations, gleaned from a remarkable existence. Because Dr. Jerry Lonecloud was a born and practiced showman, the line between myth and reality is sometimes unclear, but there are many lessons to be taken from his extraordinary life.