Comments/Observations Reported by the Trail Patrol Wardens:
1.     Trail Patrol Wardens constantly clean the trails and parking lots of various forms of garbage & dog feces. They restock the Dog Bag Dispensers located at several trail heads. The Trail Brochures handed out to the many trail visitors are greatly appreciated.

2.     Vandalls damaged the signage leading to the entrance path at Rosemary’s Way on the Salt Marsh Trail. 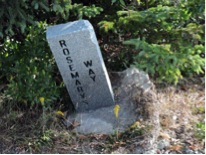 3.     A Warden removed a fallen tree from the Bissett Trail. They do this often as well as remove broken branches which could pose a hazard.

4.     A Warden, who luckily had bicycle repair tools on-hand, was able to assist a bicycle rider on the Salt Marsh Trail who experienced mechanical problems.

5.     A couple visiting from New Castle, England enjoyed a conversation with a Warden on the Salt Marsh Trail. Visitors from England often visit this trail.

6.     The lock on the West Lawrencetown Road was reported missing. Missing locks are happening more often than in the past. Some which have been cut off have been found in the area of the gate, while others are never found.

7.     A family enjoyed feeding the ducks beside a pond located on the Forrest Hill Trail.

8.     Several Trail Patrol Wardens travel many kilometers on the trails by bicycle. One reported having travelled 324 km during the month of August.


9.     An abandoned bicycle was seen on the Shearwater Flyer trail. It was gone a couple of days later.

10.  ATV’s spinning their wheels have been causing damage in several areas of the Shearwater Flyer.

11.  Several trail walkers have been complaining about the copious amount of dog feces seen on the trails. Much of it is being cleared away by Wardens on a daily basis.

12.  The growth of weeds along the various trails this summer has been impressive. Some of them are quite pretty.

13.  Recently, motorcycles have been seen speeding in a reckless manner on the Salt Marsh Trail. On one occasion, many trail walkers were showered with crusher dust as they sped by them. The motorcycle riders appear to be taking a short cut to the West Lawrencetown Road. Signage indicating that they are not allowed is being disregarded.

14.  Many trail users have expressed thanks to a Warden for ringing his bicycle bell when approaching them from behind. Some have asked why it is not mandatory for all bicycles to have bells. Bells may have helped prevent a serious accident recently where an elderly trail walker was struck down by a bicycle. Many bicycle users do not understand that wheels are to yield to heels.

15.  Trail visitors on bicycles continue to take a turn onto the trails inside the Heritage Park. Several times Wardens have been able to mention that for safety reasons bicycles are not permitted in Park.

16.  Maintenance crew members, who are also Trail Patrol Wardens, have been fixing the areas around benches and cutting the fields in the Heritage Park. Several older benches on the various trails will be replaced as funds become available. Wardens also wiper-snipped around a number of benches and kiosks.

17.  A dead hawk was found on the Bissett Lake Trail. It is not known how it was killed.

18.  Dartmouth Volksmarch Club bicyclers travelled down the Salt Marsh Trail to Lawrencetown Beach and back. They do this on a yearly basis.

19.  The number of horses on the trail areas seems to be on the increase. While a Warden was riding their bicycle from the Bissett Lake Trail leading to Bissett Road, he observed four riders on horseback on Brookview Drive. Also observed were eleven horses in the field opposite the Atlantic View Trail. Horse manure continues to be seen on several of our trails.

20.  A Warden encountered a Black bear while walking along the Jersey Jack Trail in the Heritage Park. It was probably checking out the large blackberry patch which was located close by. A bear was reported a few days later roaming around the housing development located near the bottom of Long Hill. A Warden met with a DNR representative and was given brochures regarding bears. Bear caution signs were posted at many trail entrances.

21.  Several members from other trail groups were provided a tour of the new Forest Hills Trail.

22.  A Warden has been taking GEO points and pictures along all of our trails for possible use in new trail maps and signage.

23.  A couple, one of whom was in a wheelchair, had a chat with a Warden at the 2 km marker of the Salt Marsh Trail. They loved the view along the trail.

24.  A couple with a young child in a stroller required the assisted of a Warden in finding their way back to the parking lot of the Heritage Park. They were provided with trail maps.

25.  Many trail walkers have been seen picking the numerous blackberries that are available throughout the Heritage Park and the trails. 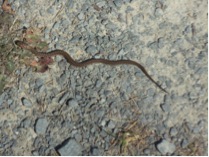 This 6 inch by 1/8 inch python was one of the many snakes seen on the trails lately.