1.     Trail Patrol Wardens constantly clean the trails and parking lots of various forms of garbage & dog feces. They restock the Dog Bag Dispensers located at several trail heads. The Trail Brochures handed out to the many trail visitors are greatly appreciated.

2.     Sadly, one of our own passed away this month after a courageous battle with cancer. Elizabeth Niforth had served CHPTA as a Board Member and Trail Patrol Warden. She will be missed.

3.     One Warden has been fielding questions from trail walkers in French. He is also willing to translate our trail maps into French.

4.     A Warden reported that he covered 427km of the trails on his bicycle while another covered 475km. This is fantastic not only for CHPTA but also for the many folks who are out enjoying the trails. It gives them some sense of security and shows them that the organization is committed to being there and their desire to be aware of what is happening on the trails.

5.     Off-leash dogs are often seen taking a swim or going after sticks/balls thrown into the water by their owner. However, many trail walkers are being seen with their dogs on leash and are very appreciative of the trails. They make a point of saying they keep their dogs on leash and appreciate the efforts made by Wardens to remind people of the need for leashes. Even when leashed, it is imperative for owners to keep control of their dogs. One Warden would have been knocked over if he had not anticipated a leashed dog was about to jump on him. Another Warden was charged by an off-leash dog but managed to fend the dog off. He advised the owner of the leash requirement. She replied that there was nothing he could do about it and continued along her way the dog unleashed.

6.     Clam diggers are frequently seen on the flats along the Salt Marsh Trail.

7.     The sighting of snakes along the various trails continues. This python must have been at least 5 inches long and 1/10 of an inch wide. Can you guess who does not like snakes no matter what their size?

8.     The picnic table on the Salt Marsh Trail and our various benches along the trails are very popular. One gentleman who has taken up sketching, with his daughter as the teacher, was recently seen sitting on one of our benches sketching the surrounding scenery.

9.     Unauthorized signage has been appearing at various trail heads. Wardens have been removing such signage.

10.  A Warden picked up and disposed of a large amount of spent fireworks canisters by the West Marsh Bridge.

11.  A Warden removed three downed trees on the Salt Marsh Trail and two from the Atlantic View Trail after a recent wind storm.

12.  Respiratory issues stopped a gentleman from walking the trails. He now uses a motorized bike and has been told many times that it is not allowed on the trails He contacted the Federal Government’s ‘Parks Canada’ and they told him that electric bikes were allowed in Federal Parks and therefore the gentleman concluded that it would be allowed in provincial parks.

13.  Serious accidents involving a walker and bicycle took place on the Salt Marsh Trail and Forest Hills Trail. The need for care by both parties is required i.e. keeping on the right side of the trail, use of bells/brakes on bicycles and travelling at a reasonable speed could help to prevent such accidents. Several trail users have expressed concern over bicycles not having bells and the cyclists’ speed.

14.  This large fire pit located a few yards off the Shearwater Flyer trail continues to be used for various purposes. On a recent checking of the site, two pairs of men’s underwear were found. Makes one wonder just what is going on here.

15.  The presence of horse manure is still being seen along the Shearwater Flyer trail. Department of Natural Resources Officers encountered some horseback riders and informed them of the “no horses on the trails” regulation. DNR Officers were also out looking for dog’s off-leash on the SF Trail.

16.  Photographers, some with very long telephoto lenses, have been spotted on our various trails. They are very impressed with the scenery and variety of wildlife/insects.

17.  The Shearwater Flyer Trail was used as a portion of the Maritime Race Weekend being held in Dartmouth/Cole Harbour. Several Wardens patrolled the SF Trail to ensure the safety of the runners.

18.  Good weather brought out the party crowd. Often the remnants of a drinking bash are found in the various parking lots and along the trails.

19.  A Warden assisted a woman walker who got lost on Costley Trail by providing trail maps and directions to the parking lot.

20.  A woman walker was scared for herself and her dog when confronted with three German Shepard dogs on-leash with two other large dogs which were off-leash.

21.  Several seagulls were spotted eating apples they found in water along the Salt Marsh Trail.

One of the many beautiful views along the SMT

22.  On many occasions, especially on the weekends when the weather was fine, the parking lots were completely full and the trails packed with walkers and bicycles.

23.  A trail walking couple who enjoy the scenery in the Heritage Park have offered to make and install new crosses in the Poor’s Farm cemetery. This has been referred to the CHPTA Chair.

Current crosses to be replaced

24.  Household garbage being deposited in the trail head garbage cans continues to be a problem. Also, yard debris is often left at the sides of the parking lots.

25.  Once again, trail maps were provided to the local Welcome Wagon representative to pass along to newcomers to the Cole Harbour/Dartmouth area.

26.  As Fall approaches, many trees along the trails are starting to turn colour. 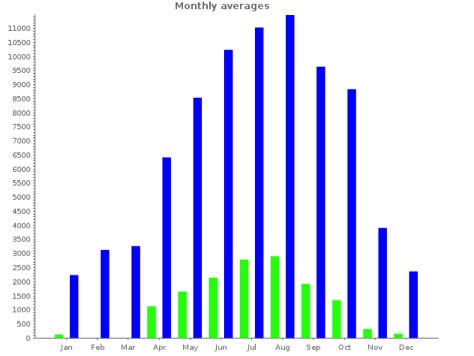 Chris Peters of the ‎Nova Scotia Bird Society toured the Salt Marsh Trail on September 8th. He spent 4 hours and 20 minutes on the trail and wanted to share the birding results of his walk on the trail. If the quantity says "X" that means he saw that species but didn't keep totals.